We no longer need to explain the importance and power of Value Stream Mapping (VSM).

VSM (or also called Brown paper) is the tool with which you can review the organization and see where the improvement options are located. Whereas in theory we often use the original VSM layout described by Mike Rother and John Shook in the book “Learning to see”, LMP uses the so-called Business Value Stream Map (B-VSM). This version makes it easier to describe the processes involved, which gives a complete picture from quotation request to delivery, including installation.

The original VSM is strongly focused on production and assembly processes. However, we know from experience that the cause of wastage is often hidden in the front end of the process. Also, the biggest waste is often not in one department but between two departments. The power of a B-VSM comes to the fore here.

The result:
An improvement plan drawn up by the own organisation (bottum up) which is in line with the company’s strategy after which the employees themselves set to work on realizing the points for improvement. This creates support throughout the organisation. 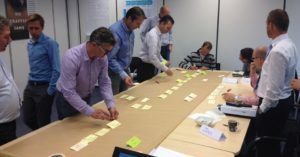 Get a good picture of your own business?
LMP regularly creates Value Stream Maps for large and medium sized technology companies. Through the input of external expertise, internal differences are quickly bridged, “common” pitfalls and waste are immediately identified and in a maximum of 3 days you have defined a solid improvement plan that is put forward by your own employees. In short, an excellent start, on to the next level!